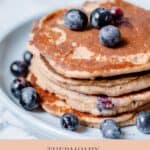 If you follow a vegan diet, these pancakes are lovely to enjoy without using eggs and milk. The oats and almonds are ground in the Thermomix into fine flour, and the banana binds them together. I've added some cinnamon, but you could leave it out altogether if you prefer.

Once all the ingredients are mixed in the Thermomix, the mixture should be quite thick. You have to be careful with some vegan pancake recipes as they have a tendency to stick to the frying pan. I guarantee that these won't, just ensure there is enough coconut oil to coat the frying pan's bottom, and they should be okay. They take a few minutes longer to cook than traditional pancakes, but patience pays off.

I love these served with a drizzle of maple syrup and a few extra blueberries on the side. You could also enjoy them with some Thermomix Almond Butter slathered on top.

If there happens to be any leftover, they keep really well in an airtight container in the fridge and can be speedily heated up in the microwave for a quick afternoon snack.

If you're after the traditional pancake recipe made with eggs, flour and milk, check out my Fluffy Thermomix Pancake recipe.

The mixture should be quite thick, but if too thick add a little more water.

These pancakes take a little longer to cook than regular pancakes.

Any leftovers can be stored in an airtight container and heated up in the microwave for later.