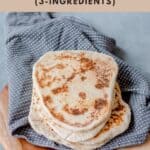 A super easy recipe for Thermomix Naan Bread made with flour and Greek Yoghurt. They take ten minutes to prepare and taste lovely served with a spicy curry!

This is such a simple recipe for naan bread and beats anything out of a packet. It's healthy, fresh and free from additives and preservatives.

For this recipe, I've used self-raising flour, Greek yoghurt and a little baking powder. The great thing is you don't have to be an expert at rolling dough as naan bread can be any shape or size!

I love quick and easy it is to make. We always have flour and Greek yoghurt in the house, so it takes no planning and makes an excellent alternative to rice.

How to Make Thermomix Naan Bread

To make the dough, add the flour, yoghurt and baking powder to the mixing bowl and knead for a minute. Then turn out onto a lightly floured surface and shape into a ball. As it doesn't contain yeast, there is no need to leave it to rise so you can just proceed with the next step.

Cut the ball into equal fours then roll them out with a rolling pin to 3mm thick or thereabouts. They don't have to be perfect unless you want to impress.

Finally, when all the naans are rolled out, cook them one at a time in a frying pan on medium to high heat until they start to puff up. They only take a couple of minutes each side and can burn quickly so best to watch them like a hawk.

If you don't have Greek yoghurt, plain yoghurt can be used instead. I would love to make garlic naan next time with some fresh herbs. Once I have a recipe I'm happy with I will update this post.

See the recipe post for all the best tips for success.