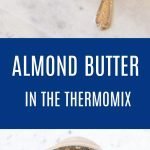 A fail proof recipe for Thermomix Almond Butter made with almonds and nothing else. It takes less than ten minutes to wiz up a batch and is far tastier and nutritious than anything out of a jar.

Almonds are expensive but they're one of those luxuries that are worth it as they're delicious and brimming with nutrients. Forget expensive face creams, almonds contain Vitamin E which can help nourish your skin and protect it from the sun's damaging UV rays.

The trick I've found to make the best Thermomix Almond Butter is to use at least 500g of almonds, otherwise you spend forever scraping down the bowl.

Also, mixing for longer at a lower speed of 4 & 5 prevents the mixture from 'splatting' around the bowl. I find the fresher the almonds the better and another tip I've learned is to make sure the bowl is completely clean and dry before mixing.

As the blades spin the almonds are ground down finely and start to release their natural oils, making butter. The Thermomix bowl also starts to heat up which makes it all the more tempting to eat the mixture before storing it. This method could take ages in a normal blender but is super quick in the Thermomix.

My favourite ways to enjoy almond butter is in smoothies, on toast with some sliced banana, mixed in with porridge or on its own straight out of the jar.

Almond Butter can be stored in an airtight container in the fridge up to a week or in the freezer for up to three months. Thaw out at room temperature.

How to make Tahini in the Thermomix
Thermomix Peanut Butter