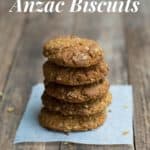 Celebrate Anzac Day with these traditional Thermomix Anzac Biscuits. A simple recipe which is deliciously crunchy and ready in less than half an hour. Anzac biscuits have been around since World War 1 when they were sent to soldiers overseas by their wives. As the biscuits don't contain eggs, they kept very well during the long journey. Eggs were also scarce in those days as a lot of poultry farmers joined the fight in the war.

Now they're sold commercially all year round but it's always nice to bake a homemade batch for Anzac Day (25th April). This is the classic recipe that's been adapted for the Thermomix. They always turn out well and are gone in next to no time!

Weigh the butter and golden syrup in the TM bowl and heat for 3 mins/70/speed 2 until the butter has melted then mix in the bicarb soda for 5 sec/speed 3. Add the remaining ingredients to the TM bowl and mix for 10 sec/reverse/speed 4 until fully combined. Roll out into walnut sized balls and press down gently. Bake in the oven for 12-15 minutes until golden. Leave to cool on the baking tray for 5 minutes then transfer to a wire rack to cool completely. They will be soft out of the oven but will harden when cooled. N.B. The batch I made above could of been squashed a little flatter. Whilst we are staying at home, home schooling has had its challenges and there are many distractions!

These Thermomix Anzac Biscuits keep well for a couple of weeks in an airtight container or you can store them in the freezer for up to 3 months.