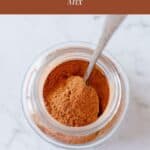 An autumn favourite, this homemade Thermomix Pumpkin Spice is easy to prepare and can be added to all kinds of dishes.

Despite the name, pumpkin spice does not contain pumpkin, but a mixture of ground cinnamon, ginger, nutmeg and cloves. You don't need a Thermomix to make it, but I like to use my one for ease.

Pumpkin Spice can be used to create favourites such as a Pumpkin Spice Latte and in baked goods like Pumpkin Pie. The mixture is a similar blend to chai spice, but without cardamom added.

If you're a cinnamon lover like me, Costco sells 300g tubs or you can order cinnamon in large quantities online. The Thermomix can also grind cinnamon quills for you.

In addition to pumpkin pie, here are a few suggestions for recipe ideas: -

How To Store Pumpkin Spice Mix

As with all spices, Pumpkin Spice is best stored in an airtight container in a cool, dark pantry.